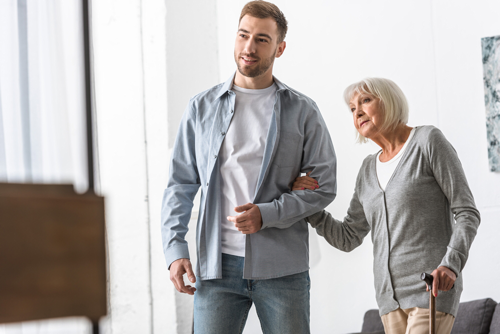 Age 82, Helen lived by herself in the home she’d raised her family in and shared with her husband until his death five years earlier. Her grown sons lived a half hour away and helped her as much as possible with the maintenance of the house. Still, it was difficult for her to stay on top of things. She had trouble with her knees and used a walker, so cleaning the inside of the house was a chore she often skipped. And as she was on a fairly limited fixed income, hiring a cleaning service seemed like an unnecessary expense. Plus she wasn’t keen on having strangers in her home.

While her two sons pitched in to mow the lawn and make repairs as needed, sometimes they were too busy with their jobs and families to stop by as often as Helen liked. She was often lonelier than she cared to admit; the neighbors she used to socialize with years ago had either passed away or moved away, and the new neighbors kept to themselves. Helen still drove short distances during the daytime, mostly to the grocery store or to her doctors’ offices, but driving these days made her nervous. Other drivers were so rude and impatient! Plus she worried that she wouldn’t know what to do if her car broke down or needed an expensive repair.

Helen’s eldest son, Henry, called me for a consultation after a visit with his mother left him feeling alarmed. “The house is really a mess inside, and it’s just gotten worse and worse. Plus when I checked the refrigerator, there wasn’t much in there and some of the food was spoiled.” He added, with some embarrassment, that his mother’s hygiene had gotten very poor. He didn’t think she even noticed that her clothes were dirty or that the house smelled bad.

Fortunately, Helen agreed to meet with me and Henry, so I could evaluate her situation. Although she seemed depressed and acknowledged that she was having trouble ‘managing things,’ she didn’t want in-home services. I asked her if she might be interested in touring an assisted living facility. Helen had a long-term care policy that would cover most of the expense. While she was reluctant at first, she agreed she would at least check it out.

That week, Henry and I took Helen to an assisted living facility with a good reputation that I was familiar with, and she got a complete tour along with lunch. She ate well, and mentioned that she hadn’t cooked herself a decent meal in a while. She was also impressed with the activities going on, and the trips available for residents.

“I wouldn’t have to drive myself,” she said. “They even have a trip to the casino.”

It took some time for Helen to think it over, but eventually her sons convinced her that making the move to the assisted living facility was a better option than staying at home, isolated as she was. She would be able to maintain her independence but wouldn’t have to cook for herself anymore, or drive to the places she wanted to go. She’d have opportunities to socialize and even take classes on topics that interested her.

Many of the families I work with struggle with what to do when it isn’t safe or healthy for their loved one to live alone at home. As an experienced care manager, I can help them sort through the options open to them, and gently guide them to the decision that’s right for them and the senior. For some, living at home is fine with the right supports and services in place. For other individuals like Helen, an assisted living facility is a viable option, and for others, it could be an active adult or independent living community. Much depends on the person’s lifestyle and healthcare needs.

If you need help in the Rochester, New York, area, please reach out to us at 585-787-0009 or info@seniorschoicecare.com. If your aging parent is outside of our area, you can still contact us for a referral to a geriatric care manager in other locations.

Keep in touch with us on our Facebook Company Page: